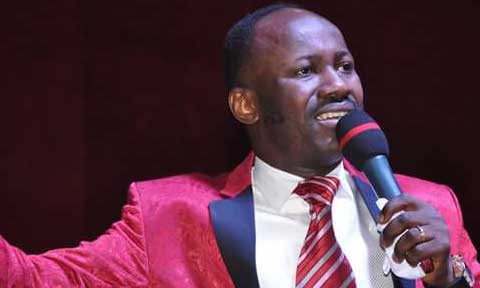 While preaching in his church in Edo State recently, Apostle Suleman said

‘No regard. Imagine comedians will be cracking jokes and using Jesus for a joke, calling Jesus Bros J and a pastor doesn’t go to the altar and give him a sound slap.

As the young Apostle Johnson Suleman began to grow, his parents observed that he was somehow strange in the way he did things. He values the things of God even as he attends the mosque with his father. As young as he then was, he knew he was not in a path he was meant to be. While he was doing his secondary school in Auchi his hometown, Apostle Johnson Suleman had an encounter with Christ but he, however, received a lot of pressures that made him withdraw from Christianity for a little while.

However, Apostle Johnson Suleman later moved to Benin City in Edo State, where he finally declared for Christ and got reconnected with his DESTINY. Immediately after that, Apostle Johnson Suleman started hanging out with his Christian brothers and accompanies them for work of evangelism and prayers. On June 20, 1994, he got a revelation where he saw the image of the globe being given to him with a biblical inscription of Acts 10:38 written on it. Before this happened, Apostle Johnson Suleman had read through the whole Bible repeatedly for three good times because of his unquenchable thirst for God. However, all the time he had studied the Bible, he never gave any particular attention to Acts 10:38.

Apostle Johnson Suleman arose from the vision, he was so shocked, and immediately searched for his Bible to check out what the scriptures reveal. Upon opening the verse, he saw that it contain the following sentence: "How God anointed Jesus of Nazareth with the Holy Ghost and with power: who went about doing good and healing all that were oppressed of the devil, for God was with Him". He then immediately understood that he had just been communicated the Mandate given to him by God to preach his gospel around the world with a Power Ministry. It is consequent upon the above that his ministry, Omega Fire Ministries International was later born.

Omega Fire Ministries International ‘s website has it that God gave His chosen servant, Apostle Johnson Suleman, a divine mandate to clean the tears, have peoples' destinies restored by the preaching of the word, and bringing into manifestation the power and reality of the Holy Spirit. They maintain that God equally instructed His chosen Servant to bring to an end, the affliction of His people by telling him “ I AM SENDING YOU WITH AN OMEGA ANOINTING…”

The Omega Fire Ministries International was accordingly brought into existence to restore the joy of men, making men to manifest their destiny, thereby becoming the best that God created them to be and reversing the wickedness of the enemy.

Omega Fire Ministries International believes in the fire operation of the Holy Spirit of God which refines, purifies and at the same time destroys. The mission of Omega Fire Ministries International is one that believes in the judgment of God on the wicked. The ministry believes that the oppression and demonic manipulations are the reality, they know equally that the authority of God’s power is more real, that it is all-powerful and all-pervading.