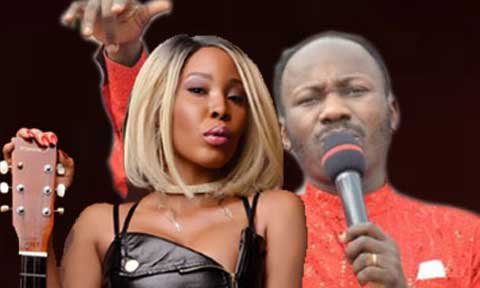 A few days after Apostle Johnson Suleman released a video of Miss Stephanie Otobo apologising to him and saying she was hired by unnamed politicians to unhinge the preacher with a s-x scandal, a newly released video has surfaced to show the confession was scripted by Apostle Suleman and his handlers.

The almost nine-minute video was recorded on June 21, 2017, by Canada-based Worship Media.

Introducing Miss Otobo in the video were two people Chidi, and Erica. They said they met Miss Otobo last year after the s*x scandal broke between her and Apostle Suleiman and had left her broken. She sought spiritual and moral support from them, which they offered.

Chidi and Erica said Miss Otobo told them that she was under pressure from Apostle Suleman to apologize and lie that it was the Nigerian government that hired her to destroy him. In the video, Miss Otobo herself said she was phoned by Apostle Suleiman's agents in Canada, US and Nigeria, urging her to return to Nigeria and tell the lies that had been scripted by the preacher.

When the pressure piled on unbearably and she decided to visit Nigeria to follow up on the case slammed against her by the police working closely with Suleiman.

Miss Otobo met with Chidi and Erica and requested to have a video recorded, as she did not know what could happen to her in Nigeria.

She urged them to release the video in case any untoward event happened on her visit to Nigeria.

Speaking, Miss Otobo thanked those who have supported her and stated that Apostle Suleman was pressuring her family and others to lie that the government was behind the scandal.

"This is what Suleman is asking me to do," she said.

She stated that she didn't know how far the preacher was ready to go to extract a confession from her. She wondered why Apostle Suleman didn't see the scandal coming if he is a true man of God.

Chidi, who introduced the video, said he received a text from a source apparently working with Apostle Suleman on Sunday, warning him against releasing any more video claiming that over time, Miss Otobo had confessed that he was also part of the plan to destroy the preacher. The "aide" also said the preacher's camp is ready to release videos showing Miss Otobo saying how Chidi was part of the plot.

Chidi, however, said he had passed on the message to his lawyers.

Last week, and days after she appeared in a court hearing in Lagos and also filed an affidavit asking a Lagos high court to demand to have the priest manhood examined and compared to those she took from phone s*x session, Ms. Otobo suddenly disappeared after meeting with her lawyers in Lagos. On Saturday morning she was shown on video "apologizing" to the controversial priest to the consternation of church members who apparently didn't know it was all scripted.

Since appearing in Apostle Suleman's church for the confession, Ms. Otobo has not been heard of again, fuelling speculation that she might be in danger of being held against her will.