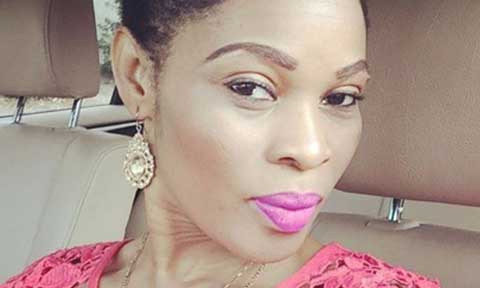 The actress who was so furious about how he could so much demean ladies without anyone questioning such a horrible and morally wrong act said he needs to be thought a lesson.

She cried out for the intervention of human right organisation to step into the matter by ensuring that the socialites takes responsibility for such degrading act and for the ladies who agreed to be put under chain, she promised to give financial reward to whoever disclose their identities. She advised that they should be put in rehab.

She took to her socila media to blast PrettyMike , her writeup reads, "This man/child thought he could block my account..
Boy you are wrong ###
You were born or raised in Texas??? Makes it better
For them to put you on A leash
Please I urge you all to report his account to all social media..
This cruel, inhumane act needs to stop
And this fool needs to be locked up for good .
His IG account info is @prettymikeclubuno

This mistake of a fool forgets that are security agents in plainclothes all over the web.. FYI when you have security clearance from the highest level.. cheap fools like you are nothing but criminal.. @iambankanthony take note

She also blasted many celebrities who were suppose to be the mout piece of the people.

"Where are all the so called celebrities that are supposed to be the mouthpiece of its people?
Why are so many of us mute on this matter? Actors? Musicians, models and elected officials?
When did our society become numb to everything morally wrong and inexcusable? When did we as a nation and people degenerate to this level? I expect all to be shouting and using their place in the society to call out this folly?

If this were to BE a white man today on the streets of Lagos tying two black girls or boys on a leash; I bet we will all cry foul and call for his execution... so why do we all think it's ok? Because he is a black man ?

Some say the girls are cool with it and are doing it willingly... does that make it morally right? Both the girls and the boy need to be checked in into a rehab..

Where are all the men in Nigeria that should be outraged by this boy child for putting them in the worst of light?
We are all the women? That should be saying curse be the day this boy was born and to the breast that gave him suck...
I know some people know the identities of these girls please report and I will reward you financially they need to be in rehab..
When did we as a society come to this level?

Parents!! Most of you have failed your kids.. your child comes back home with gifts they can't afford yet you dance for joy? How did we become these Nigerians?
This picture should be on the walls of every Nigerian actor or artist condemning this act of barbarism..