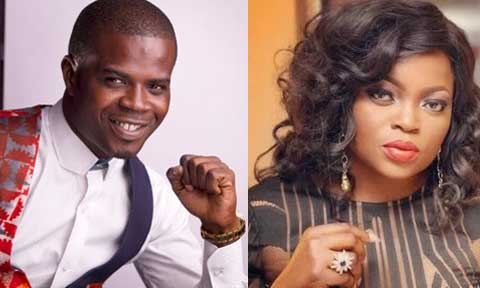 JJC and Funke might have been married for just few years but their love story is interesting. Both of them have shown that they are compatible and their love keeps waxing stronger by the day.

The 2 love souls met on the course of what they know how to do best, film production and since then they have been on a rollercoaster.Funke Akindele is as popular as back of a palm and has been a mentor to the young ones. For those who don’t know Funke’s husband.

JJC Skillz real name is Abdul Rasheed Bello. He was born over 40 years ago. His birth state is Kano. Despite his Nigerian origin, he has been living in London for the last 25 years. He is currently a Nigerian rapper, singer, producer, and songwriter. JJC Skillz songs are been heard all over Nigeria and diaspora. He also worked with USA and UK top charts artists, like Ginuwine, Liberty X, Lemar, and Jamelia.

Popularly called Jenifa by her teaming fans, Funke on the other hand also shot to limelight when she featured in a TV series, i need to know”. And since those years, her name has always been at the fore front. Her husband is in charge of her 2 film productions, Jenifas diary and industreet. They got married in London for close to 2 years now and in one of JJc interview with a daily newspaper. He spoke glowingly about Funke and how their path crossed.

In his words’ When asked if he had taken a break from music, he said: “Yes. My music is on hold, because I needed to focus on this great opportunity that came to my doorsteps. Jenifa’s Diary is a big project, you can see we have been winning awards here and there. We as a family, have our hands full already in different productions. As busy as you have described your wife and as budding as your skills are in cooking, how does your wife still have time to cook for you? Or doesn’t she?

Why not? Yes, she does. It is said that the best way to a man’s heart is through his stomach. Definitely, she cooks amazingly, but I told her to stop, so she can get enough rest. Most times, she would insist, because she wants to take care of her man. But I always insist, as we now have chefs.Was it her cooking skillz that attracted you to her My wife is a fantastic cook, she’s an amazing woman.

Everything about her attracted me to her. It’s not only one thing that attracts a man to a woman, but definitely, the cooking is a plus and my wife has it all. I would want to eat her meals for the rest of my life. So, how does it feel being married to a popular actress?To be honest, I lived the better part of my life in the UK, so I didn’t really know who Funke Akindele was. When I met her, I just met someone that wanted a director for her TV show; Jenifa’s Diary. That was in 2013.

We have been going on for a long time, people just found out in 2016. We were very low keyed, because we are two popular people in the entertainment industry. We had to protect our privacy.He also shared exactly how their path crossed, “She wanted someone to direct her TV series, then I was about to embark on recording the JJC album then. Her sister introduced us, because she knew I was into music video directing. So, when I met her, she told me she did a movie sometime ago and would like to turn it into a TV series.

We started working together and preparing for the shoot, then one thing led to another. Here we are today, the rest is history. We just clicked.It sounds like love at first sight.Well, I would say so, because first time I saw her, I was wowed. She also told me the same thing. We tried to keep the whole work as professional as possible but along the line, emotions ran high then asked how was the proposal?

I’m a romantic person, so I gave her a dose of it. It wasn’t in an open place, because only very few people knew at then. So, that very day, she came home to meet flowers, candles everywhere; quite a romantic set up. When she saw it, she had no choice than to say ‘Yes’.

They have always been together and it keeps waxing stronger each and every minute.