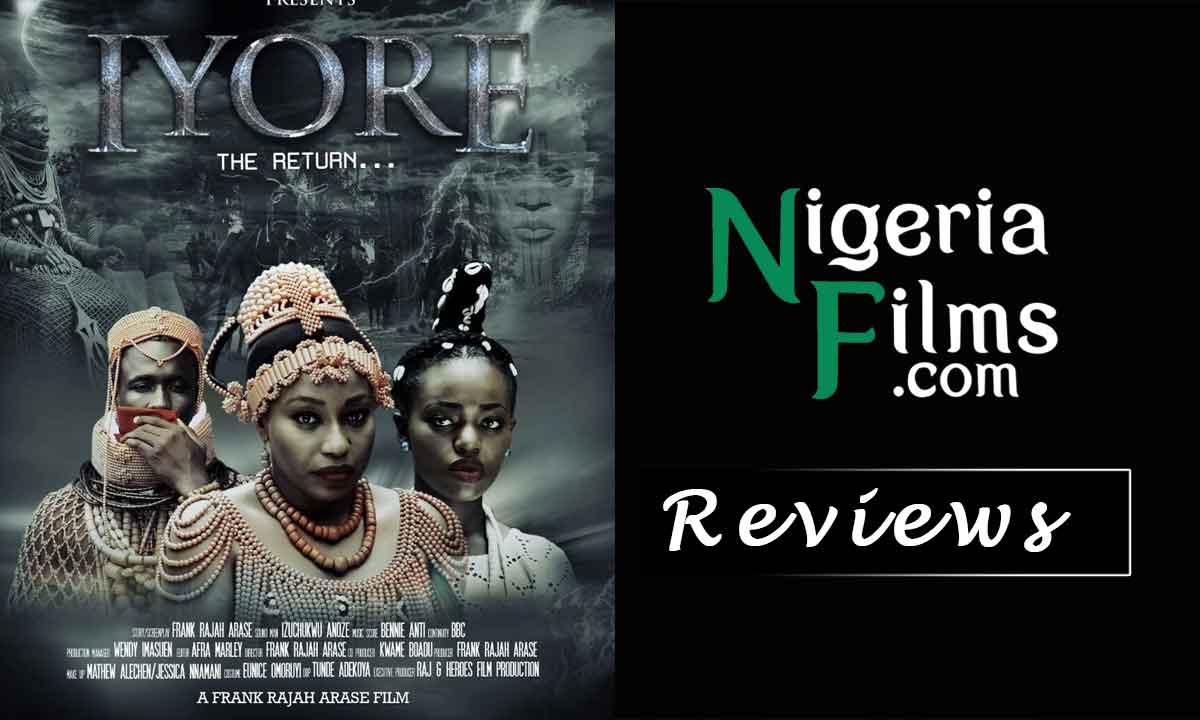 Iyore (translated as The Return) follows in the line of movies set in Benin, with rich cultural display of the Bini Kingdom. Directed by Frank Rajah Arase, (2015) Iyore tells the story of a young woman, Osarugwe, who is married to Ovie but is in love with Azuwa, a childhood friend.

Iyore (translated as The Return) follows in the line of movies set in Benin, with rich cultural display of the Bini Kingdom. Directed by Frank Rajah Arase, (2015) Iyore tells the story of a young woman, Osarugwe, who is married to Ovie but is in love with Azuwa, a childhood friend.

Her love for Azuwa causes conflict in her marriage, so much so that Ovie sends her packing. She gets pregnant with Azuwa’s twin children on an accidental night of passion, and this brings catastrophe upon their love which they must make many sacrificially, this should be the most cliché storyline ever. From way back when, we have had to watch on our TV screens as two people from different worlds come together in love, and then have to face class, religious or traditional oppositions to keep their love afloat (think Worlds Apart, think North East). In Iyore’s case, however, the story gets a slight reincarnation twist that sets it apart. Osarugwe and Azuwa are the reincarnated versions of two lovers from many years before whose hearts belong together but who the gods forbid because of an aggrieved woman’s curse. It is revealed that their love would only lead to death, and that their coexistence would always mean that one of them has to suffer; they both cannot be doing well at the same time. This curse would plague them and as many reincarnated generations after them. 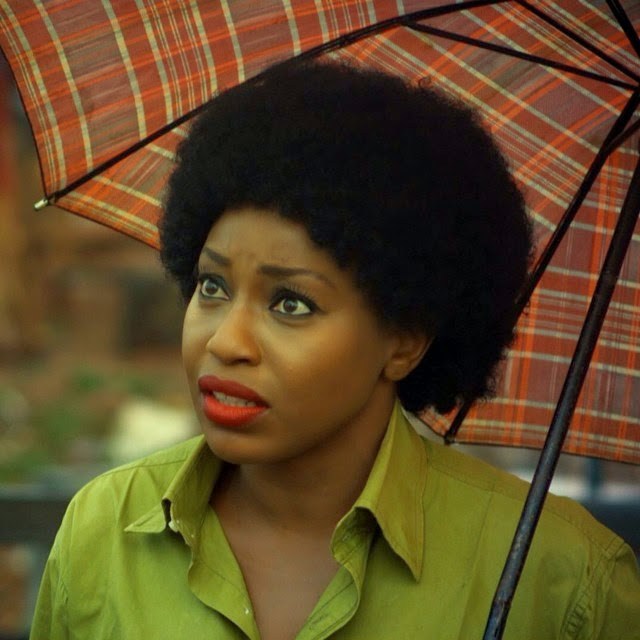 It would have been satisfying if the incarnation had stopped at these two, but no, Frank Rajah goes on to add another confused story of Adejoke, who seems the identical reincarnation of Amenze, a sacrificial virgin. Then there is Azuwa’s cousin who is shown to be saying exactly the same things as Edosa, the man Azuwa is supposed to be a reincarnation of.  This makes one wonder if the writers were just fishing in the dark for anything their hooks could hang. Why so much confusion? The confusion doesn’t stop there. Azuwa is called Eweka so many times, one begins to wonder if Eweka is another reincarnated version of Azuwa. There are moments where Onianwu and Amenze and Esosa are confused in the narration, but what is even more confusing is how the reincarnations of Amenze’s lineage are identical, but those of other lineages are not. Oh, and let us not forget the secret admirer who presents a penciled portrait to Ajoke on the day of her graduation. His name too, is Edosa. Is this supposed to mean something?

The times are not well defined. Sometimes, we cannot tell if it is the future that is being shown, or the past, or the present. We are simply thrown into times like DC superheroes, and asked to go figure. The props for each time are not properly defined either, as the cars from Adejoke’s Ondo kingdom seem too modern for the nineties, the period this part of the movie is set in. How Adejoke even manages to be borne by Queen Adekoya, is another mystery we would never understand. So a woman died as Bini and reincarnated as a Yoruba? Interesting. 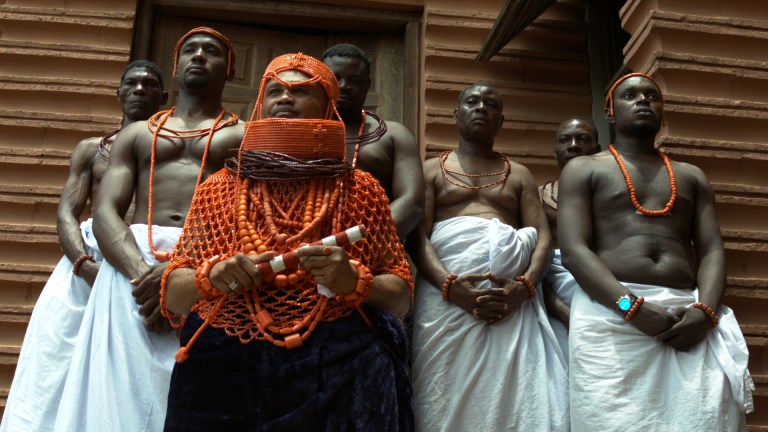 Rita Dominic and Joseph Benjamin make a believable love-struck couple as Osarugue and Azuwa. Their lines also do them justice, and at some point, you almost clasp your chest at how deep their love comes across. Cameroonian Okawa Shaznay is cast as Adejoke, Onianwu, Amenze and Esosa, which meant she needed to, at least, understand how to call names in both kingdoms properly. Sadly, she mispronounces everything.

The beauty of Iyore lies in the portrayal of its rich culture, its brilliant costumes and its poetic, biting and proverbial lines. The dialogues are properly written and the emotion the actors bring to it makes it as real to one as the hair on the skin. The man who continually sings in the palace is such a pleasant noisemaker. Gosh! He makes you want to slap his mouth shut, but we know his singing adds a certain appeal to the cultural feel.

Bukky Wright is Queen Adekoya, and Paul Obazele is Oba Izuwa, both brilliant in their roles. Yemi Blaq as Ovie is a good fit, however, his character’s death is the most unrealistic one Frank Rajah could have come up with. There is barely any struggle, so when he falls like a lifeless statue and immediately dies, you begin to ask yourself who weighs more; him or your five-year-old nephew. 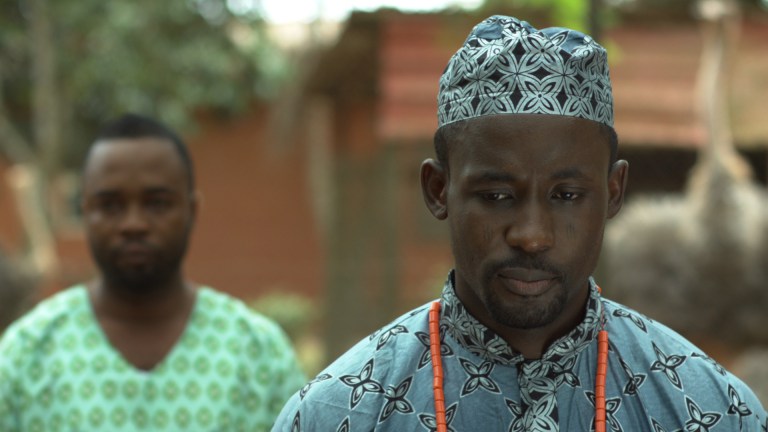 I see the good intentions of this film even with my eyes closed, but good intentions don’t amount to much in the end. Too much time was wasted at the beginning with the unnecessary parade of culture that did little or nothing to the story. In the end, where we should be made to understand the love between Osadoloh and Adesuwa (who are both thrown in our faces without any serious explanations), and their connection to Osarugue and Azuwa, it is quickly rushed through, leaving us with ‘how?’ expressions and befuddled sighs. This is never a good thing for any creative endeavor; it is like watching a comedian crack a knotty joke that no one gets.  There is no applause for confusion, and so it leaves Iyore an average movie.