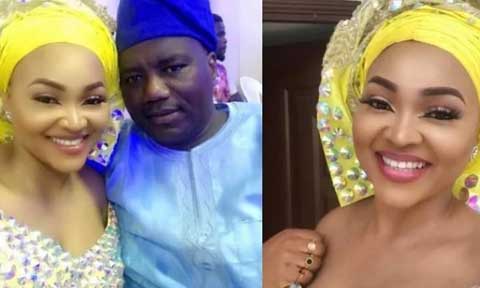 My First Marriage Broke When I Relocated To Nigeria From London – Lanre Gentry
I Have 3 Daughters From My First Marriage
Mercy Aigbe’s Domestic Violence Photo Was Made Up, She Is Destroying My Image
I Have Never Beat Mercy Aigbe In My Life, Her Parents Know That
Mercy Aigbe Wants To Be Free, She Doesn’t Want To Be Under Any Man
I Gave Mercy Aigbe N160, 000 To Cook For Our Easter Guests But She Went For Photo shoot Instead
Mercy Aigbe’s estranged hubby Olanrewaju Gentry has finally opened up on what led to their marriage crash.

See excerpts of his chat with Tofarati Ige below:

What can you recall of your childhood?

I am from Ilesa in Osun State and I am the first child of my father. I had my primary school education in Ikare, Ekiti. I had my post-elementary education at the popular Victory College also in Ikare, Ekiti. For my tertiary education, I attended the University of Benin, where I studied physical and health education. I later observed the mandatory National Youth Service Corps programme in Sokoto State and I finished in 2005.

How did you start your business career?

I was born into the car business because that was what my father was doing. However, I started my car importation business in 2006. I was importing cars from Belgium and the business was doing well. Soon after that, I started my hotel business. There have been several challenges over the years but I have been able to overcome them all by the grace of God and business is still good.

What led to the break-up of your first marriage?

I got married to my first wife in 1992, and initially, the marriage was doing well because we didn’t have any problem. Later, I decided to relocate my family to the United Kingdom and I stayed back in Nigeria, so I could monitor my thriving business. That was actually what caused the rift between me and my first wife. She wanted me to stay with them in the UK but I could not abandon my business. We dragged the matter for some time until there was no other option than to go our separate ways. Apart from that, the only issues we had were the normal husband and wife disagreements.

How did you meet Mercy Aigbe?

I met Mercy through a brother of mine long before she began acting in 2007. She was working with Zenith Bank as a marketer then. I met her long after my first marriage ended but I was in another relationship at that time though. I just liked her from the first time I set my eyes on her. We didn’t begin dating immediately as it took some time to convince her. She told me she wasn’t ready for just a casual relationship, but marriage. And I assured her that was what I wanted too.

READ ALSO: Afeez Owo Is Not using Black Magic on Me- Mide Martin Defends Her Man

Did your parents support your decision to marry her?

I am a man of my own. My parents accept whatever I present to them. Mercy’s parents are also like that too. In fact, I cherish her parents so much. In spite of all that has happened, they have been trying to restore peace between us.

What are her parents doing to settle this rift?

Her parents are wonderful people and we speak every other day. They are aware of all that transpired and they have been speaking with her too. I take her mum like my own mother because she is a good and virtuous woman. I cannot look away because of her and my children.

Who shouldered the financial responsibilities of the house?

I laugh when I hear people saying that Mercy fed me and that she was the breadwinner of the family. I have always contributed to all her movie projects. However, I am not bearing a grudge against her and I still love her. All I own belong to our kids. I would rather forget about the feud and move on.

With what is happening now, do you have any regrets entering into this marriage?

I have no regrets whatsoever. I have never regretted being with any woman. Besides, I’m still legally married to Mercy. Till I hear from her about a divorce, I believe I’m still her husband and that’s why I still wear my wedding ring at all times. Maybe you should just ask her why she is destroying my image.

What actually led to the disagreement that made her leave the house?

It was during the Easter period. We were expecting some guests and I gave her N160, 000 to prepare food and other things. But that was when she decided to go for a photo shoot. From there, she went for AY’s comedy show around 12am. It was even her publicist that told me this. I then went to her stylist’s place because I was angry. We argued but I didn’t beat her; her publicist and stylist were there that day so they can prove me wrong. I am not a violent person; as a matter of fact, whenever I’m angry, I don’t talk. I don’t even want to say much about this because it is a family issue and I want to protect my family.

But she alleged that you beat her occasionally?

I have never touched Mercy in my life. All what she is doing and saying is made-up. Even her face that appeared badly bruised was achieved through make-up. She knows what she is doing; she just wants to be free. She doesn’t want to be under any man.

You must have had some squabbles before things eventually got to a head, what were her complaints?

Whenever we had disagreements, she used to say that she would just pack out of the house and live alone. I think she may be influenced by some of her friends.

It was alleged that Mercy wanted to opt out of the marriage because you’re now broke and cannot support her lavish lifestyle?

My business is going on very fine and smoothly. While staying together, Mercy does not even buy ordinary water in the house. I was the one that usually took care of all the expenses in that house. I pay the children’s school fees and cater to every other responsibility as a man. The things I achieved before I turned 40 are enough for me and my children for the rest of our lives. I am also into real estate and I have a lot of investments. I am very okay and can take good care of my family.

Mercy is very fashionable, are you the one that funds her lifestyle?

Mercy has no fashion lifestyle. But yes, I am the one that funds it all. She believes so much in her husband’s money which is even one of the reasons I love her because she wants a responsible husband, which I am. Whenever she goes out and needs to buy something nice, she would tell the people there that her husband would buy it for her. And I usually oblige her whenever she makes any demand.

How actually do you contribute to her movie career?

The only movie Mercy ever used her money to shoot was Abimbola. All her other movies were paid for by the marketer. Meanwhile, I support her with whatever I can. Whenever she had to shoot any movie, she would use my hotel. She would lodge her crew there for weeks until they finished shooting. Anyway, I’m grateful to God that I was able to help her stand on her feet. I know God has blessed me to be a source of blessing to her. So, I have no regrets.

When was the last time you spoke with her?

We’ve spoken after the incident, particularly when our son, Juwon, celebrated his seventh birthday some weeks ago.

Where is Juwon staying now?

He is with his mother.

How many children do you have from your first marriage?

In Yoruba culture, we don’t count our kids. But God blessed me with both male and female children. Omolara is a graduate of money management and she lives in London; Oluwatosin is studying medicine in London as well, while Deborah is studying accounting in Dublin.

What’s your relationship with your children now?

I have a very cordial relationship with my children. I love each and every one of them deeply. I cannot do without them and I think that’s why Mercy decided to deprive me of the chance of seeing my children. Though we have only one child, Juwon, together biologically; I consider Michelle, who Mercy had before we got married, as my child too because I raised her and she actually bears my surname.

How would you describe your marital experience generally?

I would say it was just like what is obtainable in every other home. It was a mixture of both good and bad. But I don’t have any hard feelings.

What’s the status of your ongoing court case?

We were in court Wednesday and Mercy was asked to bring the children to court during the next sitting, which has been adjourned till August.

What’s the next step for you after this?

I’m open to whatever life brings. We are still legally married and I regard this as just being on break.

A lot of negative things have been said about you since the news of domestic violence broke, do you think the society has been fair to you?

No, they are not being fair to me at all. What we, men, face in the hands of women cannot be expressed. The society cannot make a fair judgment because they have only listened to her side of the story, and haven’t heard from me.