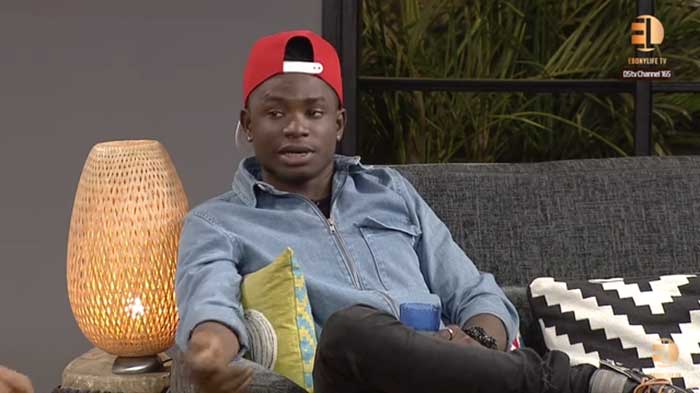 Was it your childhood dream to become a music artiste?

I have pretty much been around music all my life, and the love for music has gotten me this far. My dad is a pastor and he owns a church. However, it’s not like I made a conscious decision to become an artiste; it grew on me untill I knew this was what I wanted to do.

What was your dad’s reaction to your decision to become an artiste?

My dad was cool with it. He lets you do whatever you want to do. He feels that whatever his life story is doesn’t have to affect the way his children live their lives. According to what he used to tell me, everybody must live his or her individual stories. He watched me grow from being part of the choir, learning to play drums, and attending music shows. Till now, he gives me all the necessary support and respects my decisions.

Considering that your dad is a pastor, isn’t he bothered by your vulgar lyrics?

Those vulgar songs are basically about me doing my job and he doesn’t interfere. Besides, not all my songs are vulgar. I have recorded songs like Ishe, Semilore and others. However, the ones that go viral are the ones with vulgar lyrics. I understand my markets, and I know the demography I’m directing my music to, which is the youth and adults. I’m a blunt entertainer, but I consider my fans, and always try to give them what they want. But this year, I decided that I’ll feed my fans with more meaningful songs that will inspire them.

What inspires you to write such vulgar songs?

Most of those songs were not written; we just go into the studio and ‘vibe.’ However, my environment inspires me and it’s not like I deliberately try to be vulgar.

Beyond the stage persona, who is Keshinro Ololade as a person?

I have a dual personality in the sense that I could go into the studio and come up with crazy songs that would entertain people. I could also be home alone relaxing, and listening to soft and mid-tempo songs. Listening to my songs, some people may think I’m a loud and local boy, but they’re usually surprised when they meet me and see that I’m calm and cool-headed. I’m not that outgoing, except if I have to attend events.

I went to a number of primary schools, all in Lagos. I also attended secondary school in Lagos before proceeding to the University of Lagos to study Linguistics. However, I had to defer my admission because of my hectic schedule. Right now, I’ve enrolled at the National Open University, where I’m studying Mass Communication.

Some people believe you came out of nowhere to rise to the top in the music industry. Can you share some of your struggles?

I have always been a hustler. I started my career by attending several talent hunt competitions, and I won some of them which made me quite popular in school. At a point, I was always hanging around studios because I had no money to record songs.

How did you meet Olamide?

I recorded a song titled Lyrical in late 2013, and Olamide heard it sometime in 2014. Apparently, he loved it, and he said he wanted to meet me. When I met Olamide, he had a contract ready for me, and that was how my career kick-started. I was blessed enough to record a hit song within months, and my career has been growing ever since. I have always seen Olamide as a king, and I even respect him more now.

How would you describe Olamide as a boss?

Despite the fame and fortune around him, Olamide is just like the guy next door. He is easy-going and down-to-earth. He is friendly with everyone and he could eat from the same plate with you without airs and graces.

Was it really your label mate, Viktoh, who introduced you to Olamide?

Yes. Viktoh is a friend to Olamide’s younger brother, DJ Enimoney, and he had known Olamide for about five years before I came into the picture. We used to meet at some talent hunt competitions, and he was the one that played my song, Lyrical, to Olamide. He actually signed both of us on the same day.

It was reported that there’s bad blood between you and Viktoh?

That’s just the figment of some people’s imaginations. Viktoh will always be my brother. We all have our different times to shine.

I think Shoki is my biggest song to date. It became popular barely weeks after it was released. Initially, I was in denial because I didn’t know the song was that big. At some point, people like American singer, Missy Elliot, uploaded a video of herself dancing to Shoki. To be honest, it put pressure on me, because it was almost bigger than Lil Kesh, the brand.

Your style of music is similar to Olamide’s. Wasn’t he afraid of you overshadowing him?

No, there’s no competition between us. Olamide built the YBNL family in a way that we all love one another. Even if he is meant to release a song, and one of his artistes also wants to release a song, he would defer his to allow his artiste’s song to be put out. Besides, I won’t say I decided to do music like Olamide; it came naturally to me. We’re both from Bariga, and we have the same musical influences. YBNL has a sound of its own; it is not an Olamide sound,or a Lil Kesh sound.

Do you feel you know enough about the music industry to float your own record label?

Olamide brought us up to know every single detail about the music business. There weren’t many protocols, and he made me know all the industry contacts needed for distribution, promotion, PR and basically all parts of the business. He didn’t treat me like an artiste, but as a brother. Anyway, my label, YAGI is directly under YBNL. Olamide still handles the business for me. I’m just responsible for myself financially, but anytime I want to drop a new single or video, Olamide knows about it. YBNL is still Lil Kesh’s management, and the idea of floating a new label was a joint decision.

When will you be signing your own artistes?

It might not be anytime soon, but we’re definitely going to do that. When I feel mentally and financially ready, I will cross that bridge. Right now, there’s still a lot of work to be done on Lil Kesh.

Do you still visit Bariga where you grew up?

It’s called the hood for a reason, and I have to consider a lot of things before going. I’m like a king in Bariga, and a lot of people love me there. If I’m to go there, it has to be a grand entry with security in place because a lot of people would definitely troop out to the streets. Besides, my family does not stay there anymore. I have relocated them to a better neighborhood.

You have found fame and fortune at an early age. How have you been able to manage it?

I always say I may be 22 years old biologically, but in my head, I’m older than that. Age is not maturity. It is your experience that makes you, and I have seen a lot. From being in the ghetto to living a better life; these things have built me.

Let’s talk a bit about the Headies. Did you feel robbed that you didn’t get the Next Rated Award?

I have put that behind me as it isn’t relevant to my career. As far as I’m concerned, my award is living a good life. Awards don’t determine which artiste is the best. So far you are nominated for an award, you are a winner already.

You have also been nominated for this year’s Headies. Will you be motivating your fans to vote for you?

It’s not just about me and how I feel about these things, it’s about my fans. They supported my music this year, and that’s why the album got nominated. I’m going to post about the award on social media, and appeal to my fans for support.

Can you recall the most awesome part of your career?

Anytime I step on stage and thousands of people are screaming my name.

What’s the craziest experience you have had with a fan?

There was a time I was on Lagos Island, and some street boys stopped all the cars on the road, saying nobody should move until they had all taken pictures with me. It was crazy on that day as their action caused massive traffic build-up.

Has any female fan ever asked you to sign on her boobs?

Those things happen and I don’t even consider them as crazy anymore; it’s a normal thing.