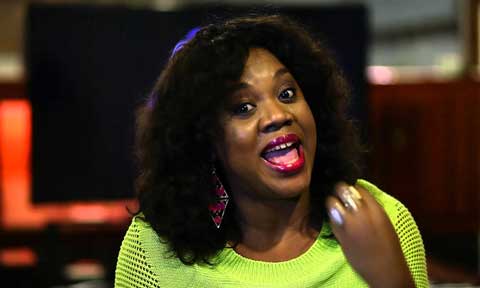 The pretty faced actress made it clear that the content of the public birthday message is not the totality of what she intends to pass to her hubby.

READ ALSO: See The Latest Bridal Makeup You Should Try As A Soon-To-Be-Bride

After being widowed and going through painful breakups and divorce; we could not help but wonder what she is saying after stumbling on these phrases in her message to her hubby “No More Tears… From me to you my heart I give… to love and hold, and always believe.” A friend said maybe she is trying to assure him of her faithfulness or is trying to tell the enemies of her marriage that Daniel Ademinokan is truly her final destination in marriage, a situation we really hope is true.
No matter what you think, one thing is sure; Stella Loves Daniel. If you doubt read the message bellow:

Love of my life @dabishop007 you are the best ever. I have so much to say but I would rather say it to you and not social media. You rock boo! Happy birthday. #hubby #birthday #love #family

It's pure and true
It's me and you
It's what we share
It's love and care
It's in his eyes
It's so defined
It's crystal clear
It's no more tears
From me to you my heart I give
To love and hold, and always believe.
Happy birthday my love @dabishop007
Meanwhile, Daniel former wife is not looking bothered at all that her former hubby is happy in the hands of another man given her stunning looks as she slayed in the recent cover Maliq Magazine were she talked about her reality television show.