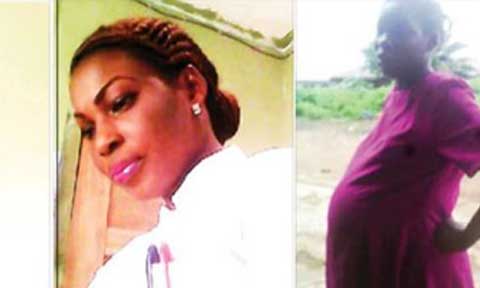 Mosunmola, who is nine months pregnant, alleged that Adu was responsible for the child in her womb, adding that they had sex in a hotel sometime in August, 2016. She said the lecturer beat her up last month when she confronted him at the college for avoiding her, adding that the case was already at the Ilese Police Station.

Mosunmola told Punch correspondent that she underwent a three-year course at the college, adding that several lecturers had asked her out before Adu, but she refused. She said,

“Dr Adu is the Oral Health Coordinator for the college. During my three years study, he taught me two courses each semester. I have never failed his course.
“When I got to second semester, 300 level, he awarded me 38 in one of his courses. I went to his office in August 2016 to know why I failed the course. I needed to pass all my courses to be able to go for my board exam.

“He asked me if I thought I could just come to the school and go like that. He said if I dated him, he would waive the course. He said he didn’t approach me in 100 level because another lecturer was interested in dating me.

“The lecturer he mentioned told me in 100 level that it was either I paid him money or used my body to pass his course. Because I didn’t agree, I failed his course. I didn’t pass it until I got to 300 level.

“I told Adu that I would date him, but I didn’t want to have any problem, and he assured me that there would be no regret.”
The victim said the lecturer took her to the office of the Head of Department and after some discussions, it was agreed that she could sit for the board exam.

After the board exam at POGIL College of Health Technology, Oke-Eri, Ijebu Ode, on August 21, Adu, who was among those on the panel, was said to have given Mosunmola some of his practical instruments and a laptop for safekeeping.

“I was preparing to leave when he called me back that I would be sleeping over with him.

“I met him with another lecturer in my department. I observed that the lecturer also had a female student with him. From the hotel, we went to different places before we finally lodged in another hotel along Ilese Road. While I was with Adu in a room, my other classmate passed the night with the second lecturer in another room.

“We had three rounds of sex. He didn’t release on time. He used two condoms for the first two rounds. The third round was, however, flesh-to-flesh. That was when he ejaculated inside me,” she explained.

She said the lecturer dropped her off at home and they continued their relationship, until she stopped seeing her menstruation a few weeks later. The Ogun State indigene said she became worried after she started vomiting, adding that she took a pregnancy test, which was positive.

READ ALSO: Actress, Awele Odita Who Got Pregnant For NURTW Boss, Fights Dirty With His Wife

She said when Adu heard the news, he reluctantly accepted responsibility, but allegedly gave her a drug, Eprostol, to abort the pregnancy. She said,
“I refused to take the drug because the prescription was not from a medical doctor. He came down to my place to persuade me to take the drug, but I still refused. He asked me what I wanted and I told him that I needed to change my accommodation because the pregnancy was a shameful thing for me. He told me not to worry, that he would handle it. After that, we had sex.

“When he left that day, I could not find my phone again. By the time I got another phone and called him, he started acting funny. Sometime, he would just laugh at me.”

Punch learnt that several people had attempted to mediate in the situation without any success. Mosunmola said attempts by Adu’s HOD, dean, and provost to mediate were rebuffed by the lecturer.

The victim said she later approached the Human Rights Office of the Ogun State Ministry of Justice at Ijebu-Ode, where a lawyer, one Kolade, called the parties for a meeting.

Adu was reported to have agreed to pay N5,000 feeding allowance per month, in addition to paying N7,000 for ante-natal registration. After paying the allowance for two months, Adu reportedly stopped.

The parties reportedly held another meeting in March at the human rights office to review the agreement. Conflict was said to have broken out among the parties when Mosunmola presented a list of things required for her delivery, which she valued at N50,000.

Adu was said to have insisted on paying N30,000, which the 28-year-old refused.
“I didn’t have any accommodation and I couldn’t buy any of the drugs the doctors prescribed for me. I told him I would only manage the N50,000. He left in annoyance.

“Since March, the lawyer didn’t call us back and Adu refused to pay the N5,000 he used to give me every month. I called the lawyer late March and asked him to help me get the N30,000, but the lawyer said I should not call him again,” she said.

READ ALSO: Banky W and Adesua Etomi Show Up in A Stunning Picture

After reporting the lecturer to the Permanent Secretary, Ogun State Ministry of Health, where Adu also worked, without any result, Mosunmola said she became desperate and went to the college on April 13 when she knew Adu would be taking a class.

She said while pleading with him for money for her medical expenses, the lecturer assaulted her. She said some people intervened and she reported a case of assault to the police at the Ilese division, Ijebu Ode.

“I am now in my 38 weeks and anytime soon, I will have my child. I am an orphan and I don’t have any of my baby items ready. I am begging Nigerians to come to my rescue. I know I have made a mistake, but I need a second chance at life. I don’t have anywhere to go. It is a church that is accommodating me now,” she said.